A Tribute to Dr. Murray Enkin 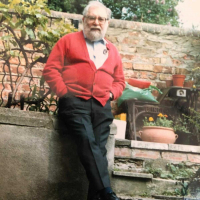 An obstetrics pioneer and prominent influencer in the early days of the formation of Cochrane, Dr. Murray Enkin was instrumental in developing evidence-based perinatal clinical trials and systematic reviews, challenging many common interventions not supported by research evidence. He, along with his latewife, Eleanor, also strongly advocated for family-centred maternity care such as the presence of fathers during childbirth and non-labour room deliveries.

Dr. Enkin, who passed away on June 6th, graduated from medical school at the University of Toronto, Canada, in 1947 and received specialist training on obstetrics and gynecology at Long Island College Hospital in Brooklyn, United States, a few years later. The mainstay of his medical practice was in Hamilton, Canada, becoming departmental chief of Obstetrics and Gynaecology at St. Joseph’s Hospital and among inaugural faculty for the opening of the McMaster University Medical School. As Professor Emeritus, he retired in 1988.

Iain Chalmers, the first Director of Cochrane UK, said, “My friend and colleague Murray Enkin has died a few days after his 97th birthday. He had every reason to be pleased with the contributions he made during his long life, and I am indebted to him for many of these. My friendship and collaboration with Murray began in the late 1970s when we had met at a meeting entitled ‘Maternity Care in Ferment’ organised by the Maternity Center Association (MCA) in New York. Prompted by discussions at the MCA meeting, Murray and his wife Eleanor decided to spend a sabbatical year with me and my colleagues at the National Perinatal Epidemiology Unit in Oxford. The most tangible result of our work together there was a book we co-edited entitled ‘Effectiveness and Satisfaction in Antenatal Care’ (Enkin and Chalmers 1982). The less tangible result of our work was the mutual learning that resulted from our different backgrounds in care during pregnancy and childbirth: Murray provided the wisdom that had come from decades of challenging some aspects of obstetric orthodoxy; I had come to challenge orthodoxy by raising questions about the effects of components of maternity care, reviewing existing evidence from research, and doing additional research to address important uncertainties. Our recruitment of Marc Keirse (who brought expertise in reproductive physiology) as a third editor led to the creation of an international team of over 100 people who worked together throughout the 1980s to create the 2- volume book ‘Effective Care in Pregnancy and Childbirth” (Chalmers et al. 1989). Murray was also primarily responsible for creating a paperback summary of the larger book for women using the maternity services entitled ‘A Guide to Effective Care in Pregnancy and Childbirth’ (Enkin et al. 1989). To correct the systematic reviews in the books and keep them up to date, the reviews were also published electronically as the updatable ‘Oxford Database of Perinatal Trials’ (Chalmers ed. 1988).”

James Neilson, Editor with Cochrane Pregnancy and Childbirth shares, “The Pregnancy & Childbirth Group was the first review group to establish with the start of the Cochrane Collaboration in 1992. Murray was its Co-ordinating Editor. He and Eleanor spent large periods of time in Oxford, and Murray developed the template of what it was to be a Cochrane Co-ordinating Editor and what a Cochrane review group would look like. More than anyone, he was the practical bridge between ‘The Oxford Database of Perinatal Trials’ and The Cochrane Database of Systematic Reviews. He stepped down as Co-ordinating Editor in 1995 when the editorial base moved to Liverpool but continued to contribute as Editor and review author. Murray Enkin was not only a systematic reviewer of high methodological standing, but he was also a beautiful writer. He was very much the lead author of ‘Guide to Effective Care in Pregnancy and Childbirth’, which ran to three editions. It started life as a paperback guide to the mammoth ‘Effective Care in Pregnancy & Childbirth,’ but took on a life of its own, combining evidence from Cochrane systematic reviews with a beautifully composed linking narrative. It was wildly popular, the third edition selling > 35,000 copies. Popular with consumers, obstetricians and midwives, its success was testament to Murray Enkin’s rare ability to communicate clearly and succinctly”.

Karla Soares-Weiser, Editor in Chief of the Cochrane Library said, "Murray Enkin will be deeply missed. We are proud of the contribution he made to the work that inspired the Cochrane Collaboration. Together, the ‘Effective Care in Pregnancy and Childbirth’, its paperback summary of contents ‘A Guide to Effective Care in Pregnancy and Childbirth’, and ‘Oxford Database of Perinatal Trials’ provided the model that led to the development of the CochraneCollaboration in the early 1990s.”

Dr. Enkin was recognized with the Order of Canada in 2013 for his contributions to maternal care and development of midwifery as a recognized profession in Canada. From 1999-2017, McMaster hosted the annual Murray and Eleanor Enkin Lectureship, to focus on the key role that humanitarian values should take in clinical research and science in general.